A&K Railroad Materials, Inc. began over 60 years ago and is currently one of the largest suppliers of railway infrastructure in the United States. A&Ks headquarters is located in Salt Lake City, Utah. Along with our headquarters, we also have eleven strategically located distribution centers and seven sales offices. A&K Railroad Materials, Inc., is proud to provide a streamlined, packaged solution from mill to milepost.

Kern Schumacher was a young nineteen-year-old man who happened upon a great business opportunity in Oakland, California, in 1956. The lower deck of the Oakland Bay Bridge was to be torn apart, and thousands of railroad ties were left with nowhere to go. Kern being the young entrepreneur he was, sought out Bay-area salvage expert Alfred Boyd, and the two jumped at the opportunity and bought every last railroad tie. Kern didn’t know it then, but he had just become co-owner of the country's largest supplier of used railroad ties. 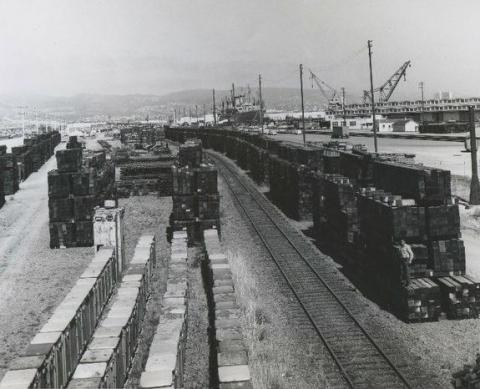 What started as the A&K Tie Company is now known as A&K Railroad Materials, Inc., established in December of 1958. A&K’s principal business was buying used railroad ties and selling them mainly for landscaping purposes. The headquarters of A&K then moved to Utah in 1963, containing less than ten employees. The headquarters of A&K at the time was an old railroad roundhouse for the naval base. There were tracks on both sides of the building with only two offices and one reception area. Quickly A&Ks sales began to double every year, and the building was getting crowded with new employees to help supplement the growth. A&K started growing across the nation with a new centrally located yard in Kansas City, Kansas, and an Eastern regional office in Pittsburg, PA. An international office was opened in Houston, TX, and a Southern regional office was created in New Orleans, LA. Sales between 1970 & 1980 grew to over 30 million with only 10 percent of our total sales volume being railroad ties. A&K sold nearly every new and relay product line and were nationally recognized as an aggressive growth-oriented company. At that time, the employees exceeded 350 throughout the U.S. Soon, A&K built a 14,000-square-foot building to house our corporate headquarters on 15 acres which is now the Salt Lake City yard.

Over the last 60 years, A&K Railroad Materials continued to develop by becoming AAR and ISO certified along with broadening the product catalog, expanding from relay rail and relay railroad ties to include new rail, CWR, manufactured in-house specialty track work, and much more. Our strategic locations and in-house manufacturing facility give us the flexibility to comply with our customers' every need. At A&K, we prioritize customer satisfaction. Success for us is supplying premium products and leaving our customers satisfied every step of the way. A&K has a proven track record of delivering the quality products and expert services you need when you need them and having staff with expert knowledge of what it takes to get the job done right every time. A&K accomplishes superior customer service by leaning on our core values which motivates our hardworking employees in and out of the office. Our dedicated sales team works with each customer to create packaged solutions, while our operations division is dedicated to providing a streamlined packaged solution from our yard to yours. When you work with A&K, you never have to worry; we have the total capacity to take your project from start to finish. Our core values are the foundation of how A&K has continued to succeed for over 60 years. With our four unique and attentive values, we strive to own what we say and do, compete for our ownership, serve our partners, and build exceptional teams.

Learn more about our Services & Divisions